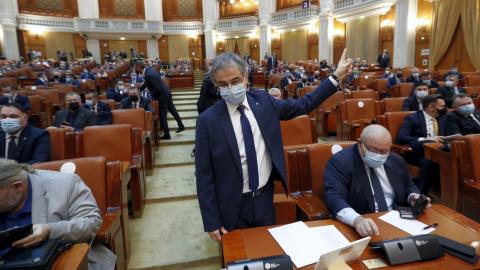 The bicameral Romanian parliament on Tuesday elected two new judges at the Constitutional Court - Bogdan Licu and Laura-Iuliana Scantei, both of whom are believed to be close to President Klaus Iohannis.

Licu, who was nominated by the Social Democratic Party, PSD, for the position, was supported 208 lawmakers in the Chamber of Deputies while 93 voted against.

"I will defend the rule of law, the rights and freedoms of the citizens. I will protect the Constitution and the national values of Romania, but also European values," said Licu.

Licu is a controversial prosecutor who started his career 25 years ago in the Justice Ministry. He has been implicated in scandals related to the alleged plagiarism of his PhD and several financial issues.

Licu stated during the hearings for the Constitutional Court position that he had given up his scientific doctorate because he considered that his doctoral thesis "did not meet the highest scientific requirements". He also said that the accusations of plagiarism are not true, Agerpres reported.

Licu studied law at the private Spiru Haret University in Bucharest between 1991 and 1995. The university was involved in several scandals because of its alleged laxity in issuing diplomas.

In March 2020, the Section for Prosecutors of the Superior Council of Magistracy issued a negative opinion on Licu's potential appointment to the number two position in the General Prosecutor's Office.

Licu was selected for the position of First Deputy Prosecutor General by the National Liberal Party's Justice Minister, Catalin Predoiu. Despite the CSM's negative opinion, which is consultative, Licu was appointed by President Iohannis by presidential decree.

Because of this, Romanian media claimed...