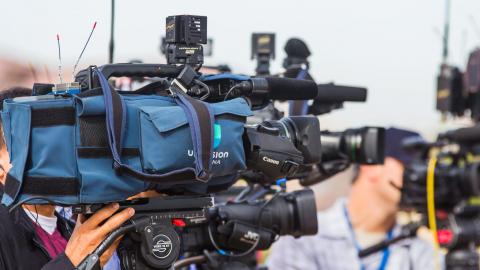 Reporters Without Borders' 2022 World Press Freedom Index, published on Tuesday, says that over the past year there has been a large increase in "polarisation amplified by information chaos" - a phenomenon that has also affected the troubled media environment in the Balkans.

The international watchdog organisation says the information chaos is a result of "a globalised and unregulated online information space that encourages fake news and propaganda".

In the Balkans, the situation declined significantly in several countries including Albania, Bosnia and Herzegovina and Greece, according to Reporters Without Borders' ranking system of 180 states worldwide.

However, other states such as Montenegro, North Macedonia, Moldova, Bulgaria, Kosovo and Serbia rose in the watchdog's rankings - although it continued to highlight shortcomings in all Balkan countries.

According to Reporters Without Borders, press freedom in Greece suffered serious setbacks over the past year, with journalists regularly prevented from being able to properly cover issues from migration to COVID-19.

The assassination of veteran Greek crime reporter Giorgos Karaivaz in April 2021 remains unsolved despite the government's promise of a quick investigation.

Last year Greece ranked 70 out of 180 countries in the Reporters Without Borders report and this year it has been ranked 108, a fall of 38 places.

Albania fell 20 places in the Reporters Without Borders index, from 83 last year to 103. The report says that the editorial independence in the while journalists are being targeted by organised crime groups and even by police violence, and the state is failing to protect them.