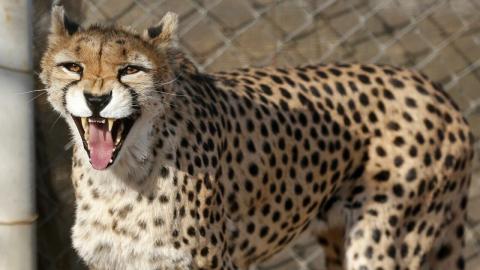 An Asiatic cheetah gave birth to three "healthy" cubs in Iran, the head of the environment department said on May 1, calling it a first in captivity for the endangered species.

"This is the first birth of an Asiatic cheetah in captivity," he said.

"By preserving these cubs, we can increase the cheetah population in captivity and then in semi-captivity," Salajegheh added.

The cubs were born in the Touran Wildlife Refuge in the Semnan province east of Tehran, where the mother and her babies are being monitored in intensive care.

The world's fastest land animal, capable of reaching speeds of 120 kilometers (74 miles) per hour, cheetahs once stalked habitats from the eastern reaches of India to the Atlantic coast of Senegal and beyond

They are still found in parts of southern Africa, but have practically disappeared from North Africa and Asia.

Iran is one of the last countries in the world where the Asiatic cheetahs live in the wild and began a United Nations-supported protection programme in 2001.

The subspecies "Acinonyx jubatus venaticus," commonly known as the Asiatic cheetah, is critically endangered, according to the International Union for Conservation of Nature.

In January deputy environment minister Hassan Akbari said Iran is home to only a dozen Asiatic cheetahs - down from an estimated 100 in 2010.

Their situation "is extremely critical," Akbari said at the time, adding that the animals have been victims of drought, hunters and car accidents.

Erdoğan calls on Russia, Ukraine to return to talks

We will continue to enhance our relations with African countries: Erdoğan