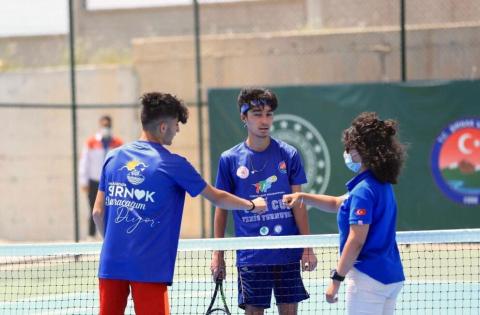 With the participation of some 150 athletes from 15 countries, the eastern province of Şırnak, once associated with terror, is now preparing to host its first international tennis tournament, the country's sports and youth minister has said.

"The noise of the tennis rackets will echo on the foot of Mount Cudi," Mehmet Kasapoğlu told the Daily Milliyet.

"Cudi Cup" was first held in the province in May 2021 as a national tournament, with 139 players from 14 provinces.

The Cudi Cup International will be held in the city from May 16 to 22.

"A national cup was held on Mount Cudi, which some tried to blacken with terror for years. The noise of the rackets had blanketed the evil face of terror," the minister said. "Just to spite those who try to face the beauties of the region, racket noises will re-echo with an international tournament."

According to Kasapoğlu, his ministry is continuing to realize all kinds of activities to make tennis a playable sport in every part of the country.

While telling of his ministry's aims, Kasapoğlu pointed out the rising number of sports high schools across the country.

Highlighting the importance of the youth, the minister added, "Youth is the hope of the country, and we will always support them."

The Cudi Cup International will be held with the coordination of Tennis Europe, an establishment organizing tournaments across the world for the youth.