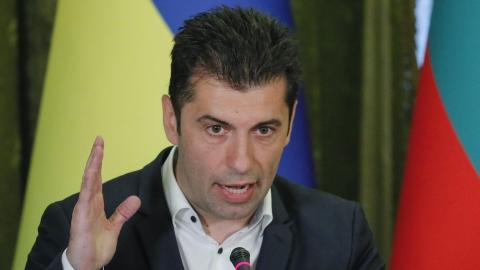 In this way, Bulgaria has increased its role in the war in Ukraine, on Ukraine's side, but without sending ammunition to the Ukrainian army - which would worsen internal divisions between pro-EU and the pro-Russian parties in Bulgaria's coalition government.

The ruling coalition includes the pro-Russian Bulgarian Socialist Party as well as the pro-EU "We Continue the Change", Democratic Bulgaria and "There's Such a People" parties.

During his April 28 meeting with Ukraine President Volodymyr Zelensky, Prime Minister Kiril Petkov agreed that Bulgarian factories would repair Ukraine's heavy military and that its port of Varna would become a hub for Ukraine's grain exports.

Sending ammunition to Ukraine was, surprisingly, not discussed between the two leaders.

Bulgaria and Hungary are the only two members of the European Union to have made only modest contributions to Ukraine since the Russian invasion.

Until the vote on Wednesday, Bulgaria had sent Ukraine only humanitarian aid, protective helmets and jackets. It recently initiated a fundraiser, which caused mixed reactions for the way it was announced. Various protests have meanwhile called for a more supportive reaction from Bulgaria.

Of 217 MPs in the chamber, 200 were in favour, one MP abstained and 16 were against, most from the pro-Kremlin far-right party Revival (Vazrazhdane) party, which gained popularity with its COVID-19 denialist stance in 2021. Revival has threatened with protests.

The vote is expected to cause more divisions in parliament.

The Socialist Party has threatened to leave...