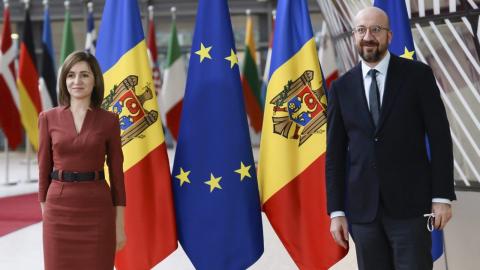 Greece is constructing two liquefied gas LNG terminals in Alexandroupoli, Greek Prime Minister Kyriakos Mitsotakis announced on Tuesday, one of which is planned to transport gas to Moldova and Ukraine.

Moldova has welcomed the news. "We have a dialogue on energy that aims to strengthen our country's independence and energy efficiency … Moldova needs investment to alleviate the energy crisis," President Maia Sandu said during Wednesday's visit by European Council President Michel to Chisinau.

Michel promised support for Moldova in the energy sector, given that it currently depends 100 per cent on gas from Russia.

Russia recently cut off supplies of gas to Poland and Bulgaria over their support for Ukraine, which is at war with Russia.

An energy expert and former presidential adviser of the Moldovan president, Sergiu Tofilat, told BIRN the new terminals would not solve problems instantly.

He warned that, as Russia's Gazprom has such a large share of gas in the EU market, it will be difficult to replace such gas volumes quickly. "There will be a deficit from this point of view, and prices will remain high," he added.

Another energy expert from Moldova, Ion Muntean, told BIRN that the EU needed to come up with a response to the current gas crisis in Europe and diversify its gas supply sources, especially in the...