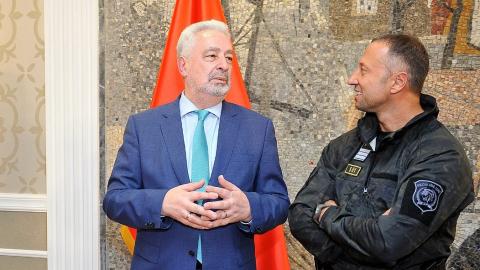 On May 1, media published audio recordings of Knezevic's private conversations with an unknown person in which he talks about his communications with criminal group members who offered to crush protests against the enthronement of the new Serbian Orthodox Church metropolitan in Cetinje.

"During interrogation, Knezevic claimed that the recording had been edited in order to discredit and compromise him, due to the fact that he was a high-ranking police officer who participated in the police operation during the Metropolitan Joanikije enthronement," his lawyer, Drazen Medojevic, told the daily Vijesti.

Last September, violence erupted in the old royal capital of Cetinje after opposition supporters and self-declared patriots clashed with police, trying to stop the enthronement of Metropolitan Joanikije at Cetinje Monastery.

The protesters claimed the installation of the Serbian bishop insulted Montenegro's struggle for independence from Serbia, to which it was united after World War I until 2006.

Police removed roadblocks that they erected near Cetinje to stop clerics from Serbia reaching the town for the ceremony. The Serbian Orthodox Church's Patriarch, Porfirije, and Metropolitan Joanikije, were airlifted into Cetinje in army helicopters.

Knezevic was one of the police officers who organised the Serbian Orthodox Church leaders' transport into the town.

But on May 1, a civic activist, Aleksandar Sasa Zekovic, forwarded recordings of Knezevic's conversations to the media and prosecution, claiming he got them by email from an unknown sender.