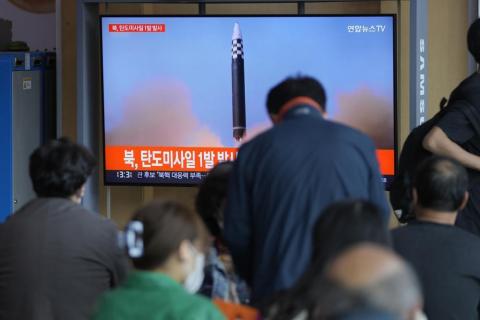 North Korea has launched a ballistic missile toward its eastern waters on Wednesday, South Korean and Japanese officials said, days after North Korean leader Kim Jong Un vowed to bolster his nuclear arsenal "at the fastest possible pace" and threatened to use them against rivals.

The launch, the North's 14th round of weapons firing this year, also came six days before a new conservative South Korean president takes office for a single five-year term.

South Korea's Joint Chiefs of Staff said in a statement that the missile was fired from the North's capital region and flew to the waters off its eastern coast. It called North Korea's repeated ballistic missile launches "an act of grave threat" to undermine international peace and security and a violation of U.N. Security Council resolutions banning any ballistic launch by the North.

The statement said that Won In-Choul, the South Korean JCS chief, held a video conference about the launch with Gen. Paul LaCamera, an American general who heads the South Korea-U.S. combined forces command in Seoul, and they agreed to maintain a solid joint defense posture.

"North Korea's series of actions that threatens the peace, safety and stability of the international community are impermissible," Japanese Prime Minister Fumio Kishida told reporters during his visit to Rome.

Kishida said he'll discuss the launch when he meets Italian Prime Minister Mario Draghi later Wednesday. "Naturally, we will exchange views on the regional situation in the Indo-Pacific and East Asia, and I will thoroughly explain the reality of the region including the North Korean missile launch today, to gain understanding about the pressing...