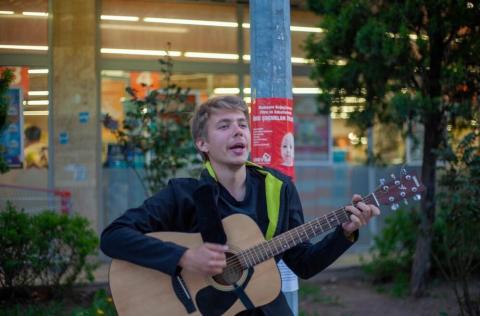 Russian songs resonate throughout the streets in the Central Anatolian province of Eskişehir as 24-year-old Ivan Reznichenko plays his guitar to earn his daily bread.

He was paying a visit to a friend in Turkey's southwestern resort town of Bodrum when Russian troops entered into Ukrainian territories on Feb. 24.

"Then, I decided to hitchhike through other countries instead of returning to my country. I am planning to move from the west of Turkey toward the east before traveling through Georgia, Azerbaijan, Armenia, Uzbekistan, Tajikistan and Kyrgyzstan," he said.

After spending three days in Eskişehir, he was impressed by the smiling faces and the young population, he added.

"As Russians, we tend to think that Turkey consists of the seaside resorts and coastal areas, but there are many various mountains, plains and villages here. Turks are really very helpful people. When I play the guitar, they approach me to ask if I'm hungry. That's not something you can experience in Russia," Reznichenko said.

He had started hitchhiking inside Russia upon his graduation from the university, and he did it again in the first days of the COVID-19 pandemic.

He is more interested in other cultures than those in Europe because the European way of living is pretty much similar to the Russian culture, he underlined.

"For me, Asia is more interesting because the religious structure and the culture are different and people are more hospitable. I'm trying to have good memories of these differences. I would like to climb up to the mountains, live internet-free and speak with ordinary people."

Some 14,000 Russians have fled to Turkey in just three weeks after the conflict in Ukraine broke out because of what they describe as...

Kos: Five remanded in custody on charges of migrant smuggling

Existing fence at Evros border to be extended further