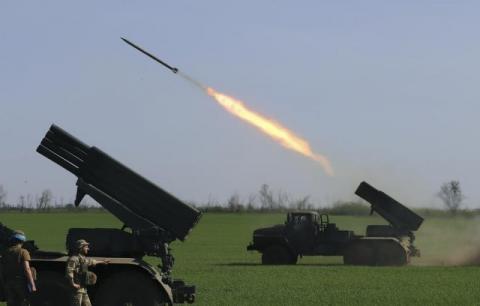 Belarus: Military exercises are not a threat to neighboring countries EPA-EFE/SERGEY DOLZHENKO

The Belarusian Armed Forces began unannounced major military exercises on Wednesday to test their combat readiness, the Belarusian Ministry of Defense stated.
"The check (of combat readiness) is planned to include the movement of a significant number of military vehicles, which could slow down traffic on public roads," the ministry said in a statement. Given Russia's invasion of Ukraine, the ministry said the exercise did not pose a threat to neighboring countries or the European community in general.
Belarus is a close ally of Russia. Russia calls its actions in Ukraine a "special military operation."

Russia has deployed 22 tactical battalions near Izyum in an attempt to advance along the northern part of Donbass, according to the British intelligence service.
Russia most likely intends to continue beyond Izyum to capture the cities of Kramatorsk and Severodonetsk, they added. This would "strengthen Russian military control over the northeastern Donbass," says the British Ministry of Defense.

The counteroffensive could set conditions for a broader operation to drive...