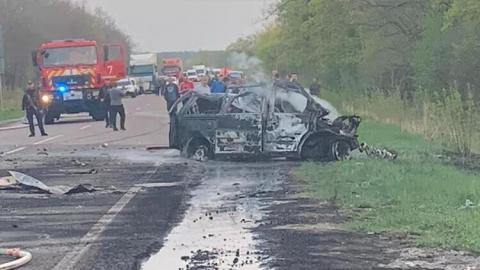 The toll from a road accident in west Ukraine has risen to 26, authorities said Wednesday, piling further misery on the war-torn country.

A bus collided with a fuel truck in the western Rivne region on Tuesday in what President Volodymyr Zelensky described as a "terrible road accident".

"A total of 26 people died in the accident: 24 passengers and two drivers," police said in a statement, adding that 12 were injured.

The statement said police were working to identify three people killed in the incident and that the youngest victim from passengers on the bus, which was making its way towards Poland, was 17 years old.

The accident did not appear to be directly linked to Russia's war against Ukraine, which is in its third month, and Zelensky did not mention any connection in his address.

In recent weeks, Russia has been focusing its attacks on southern and eastern Ukraine, while occasionally also striking sites in western regions.