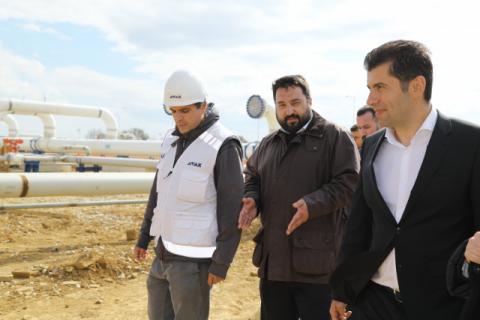 Bulgaria will sign a contract for the design of a new gas interconnector with Serbia, it became clear during a regional energy meeting in Sofia.

It was attended by the Ministers of Energy of Bulgaria, Greece, Romania, Turkey, Azerbaijan, Ukraine and North Macedonia.

The key topic of discussion during the meeting was energy security and independence of the whole region.

All ministers agreed that the region urgently needs different routes for the supply of natural gas, as well as different sources. Turkey and Greece are among the most prepared countries in the region.

Bulgaria is among the countries that have the least sources from which they can take natural gas - our country has only one complete interconnection with Romania.

There are two main challenges facing the region, around which energy ministers have united - the supply of enough natural gas for storage facilities in view of reduced supplies, which are expected to be almost stopped by Russia on pipeline gas, as well as limited terminal capacity for liquefied gas. They will not be enough to cover the needs of the parties.

Currently, Bulgaria has minimal quantities in its only storage near Chiren, which if used in the summer will be enough for 42 days, but will not be enough to cover the next winter season.

"We see how energy is used as a weapon, which is so obvious. We see unilateral breaches of Gazprom's contract when commitments are not fulfilled, when gas supplies are cut off. The only way we can compensate for these negative actions is to unite as we are united today and to realize that diversification, optimization and all other opportunities for synergy between us are there," said Prime Minister Kiril Petkov.