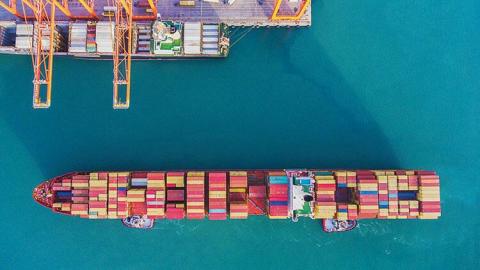 Turkey's exports increased by 24.6 percent in April from a year ago to reach $23.4 billion, data from the Trade Ministry have shown.

The country's imports exhibited a 34.9 percent increase on an annual basis to amount to $29.5 billion in April.

Consequently, Turkey's foreign trade balance produced a deficit of $6.1 billion in April, rising from the trade gap of $3.1 billion registered in the same month of 2021.

The foreign trade volume grew 30 percent from a year earlier to stand at $52.8 billion in the month.

The export-to-import coverage ratio declined by 6.6 points from a year ago to 79.3 percent in April, the data also showed.

When energy imports are excluded, the export-to-import coverage ratio improved by 3.2 percent to 100 percent.

Germany remained Turkey's largest export market, with shipments to this country rising by 21 percent to $2.1 billion. Exports to the U.S. leaped 50 percent to $1.8 billion, while the U.K. increased its purchases of goods from Turkey by 12.4 percent to $1.2 billion.

Turkey boosted its deliveries to the European Union by 29.2 percent, collecting $9.9 billion in export revenues. Exports, on the other hand, to the Near and Middle Eastern countries grew nearly 15 percent to $3.9 billion.

On the imports side, Russia topped the list. Turkey's imports from this country soared by 152 percent in April compared to the same month of last year to stand at $5.5 billion. Imports from China increased more than 37 percent to $3.3 billion and Germany came third at $2 billion.

Germany Published a List of Weapons that will Give to Ukraine

Brutal truth: Ukraine cannot be helped, as EU doesn't have what they are looking for