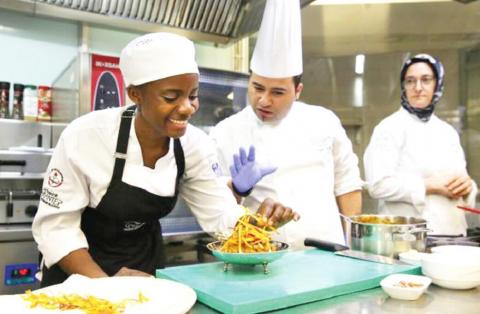 Abosede Ruth, a 25-year-old Nigerian national, has been enrolled in a culinary school in the southeastern province of Gaziantep for four months.

She is planning to open a restaurant in Canada after completing the eight-month training and an eight-month internship program.

"I love cooking and tasting. I want to be a big chef and I want to open a restaurant in Canada," she said.

"I mostly like cooking dolma, kebab, pasta, pilaf and eggplant kebab. This is a marvelous place, I love my trainers and friends. They are all very nice to me," she added.

Chef Cengiz Özkan, one of the trainers at the Culinary Arts Center Academy (MUSEM) in Gaziantep, noted that Ruth will gain capabilities in at least 500 recipes by the end of the training program.

"Initially she only knew classical Turkish meals such as kebab and döner, but now she has learned how to prepare almost all of the main local dishes," said the chef, adding that she will soon be starting to work on the international cuisine.

Gaziantep Mayor Fatma Şahin recalled that the city has been added to the list in the gastronomy category of UNESCO's Creative Cities Network.

The southeastern city is dubbed the culinary capital of Turkey. The annual gastronomy festival GastroAntep brings together world-famous chefs.

Launched in 2004, UNESCO's Creative Cities Network comprises 246 cities worldwide. It aims to foster international cooperation with and between cities committed to investing in creativity as a driver for sustainable urban development, social inclusion and cultural vibrancy.