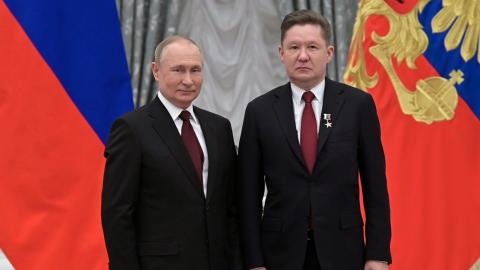 As a candidate for membership of the EU, Serbia too is under pressure to join the Western sanctions on Russia, but has so far refused to do so, not least given the importance of Russia's United Nations Security Council veto when it comes to frustrating the international integration of Serbia's former southern province, Kosovo.

Dependent on Russia for 90 per cent of its gas, Serbia may face a similar fate to neighbouring Bulgaria should it sign up to sanctions, said Krutikhin. "Then, I think you can expect the termination of gas supply," he said.

Krutikhin was scathing of the Kremlin's strategy, saying Europe was only accelerating efforts to find alternative sources of gas, while "does not have any alternatives" to Europe as a consumer.

Europe has alternatives, but does Russia?

Screenshot of Mikhail Krutikhin during interview with BIRN

Gazprom announced in late April that it was halting the supply of natural gas to Bulgaria and Poland over their refusal to pay for it in Russian roubles, a demand Putin made in response to international sanctions on Moscow over its invasion of Ukraine.

Even before the cut-off, the war had injected new urgency to a European policy of cutting dependence on Russia for oil and gas supplies.