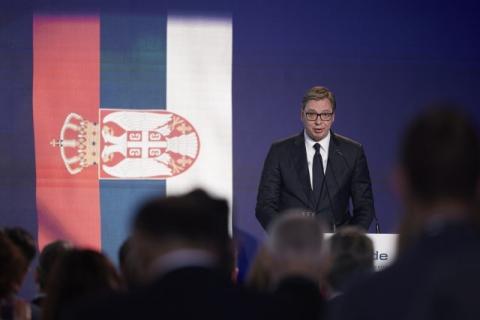 As Novosti has learned, Serbia will respond by activating the campaign for the derecognition of Kosovo, and as the paper has learned, our country has firm promises from 14 countries that are ready to withdraw their decisions on the recognition of Kosovo and Metohija.
Submitting candidacy for membership in international organizations, announced by the Prime Minister of the Interim Institutions of Pristina, Albin Kurti, during the meeting with German Chancellor Olaf Scholz, is a gross violation of the Washington Agreement, which opens the possibility for our side to withdraw from the agreement reached during Donald Trump's term.
After the meeting in Berlin, Vui pointed out that, if someone does not respect the Washington agreement, "our hands will be unconstrained".
As Serbian officials have pointed out before, Belgrade will not make the first move, "because we would be declared provocateurs."
Retired diplomat Zoran Milivojevic believes that this is not just Kurti's speech, but that it is a synchronized operation with the West in which Scholz is well-informed.
"This is an effort to reaffirm Kosovo's 'statehood' and to join international organizations controlled by the West. Since the policy of recognizing the so-called Kosovo is not going well, they want to involve them in international organizations. We will oppose it. But, If that happens, all our obligations and limitations will end and our hands will be released. Full consensus is needed to join the Council of Europe, and given that Russia has been excluded, the West is dominant. It is obvious that we are entering a phase of intensified activities to include in their sphere of interest Kosovo and the issue of Bosnia-Herzegovina in favor of Euro-Atlantic integration", he said.
...