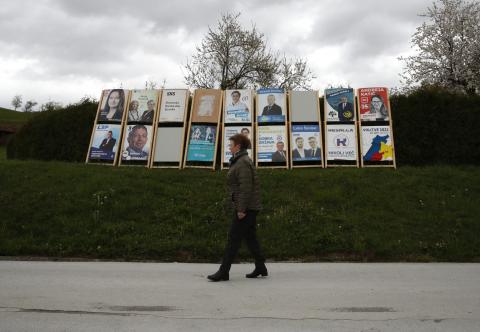 A woman walks past electoral posters on her way to a poling station in Arce, Pri Velenju, Slovenia, 24 April 2022. Slovenia holds its Parliamentary elections to name a new Government and Parliament for next four years. EPA-EFE/ANTONIO BAT

Almost a fortnight ago, Slovenia held Parliamentary elections in what was a decisive race to shape the country's future. The last two years have been difficult across much of the world, but even more polarising and destructive under the rule of Slovenia's long-present right-wing leader Janez Jansa.

The Parliamentary elections saw a vote for change. The new Freedom Movement led by Robert Golob, not a new face in Slovenian public life, won a clear victory and mandate to form the next government. In his opinion piece for BIRN, Alem Maksuti argues that the opportunity that this presents must not be squandered.

As the EU imposes its sixth round of sanctions against Russia - targeting the oil sector in particular - Serbia is becoming ever more painfully aware of just how dependent its energy sector is on Russia and Russian companies.

At the intersection of this dependency is NIS, the country's only oil refiner and oil and gas extractor. Bought by GazpromNeft in 2008, the company has come close to being crippled by EU sanctions. Increasingly, there is talk of GazpromNeft divesting itself of its stake in the company. But how realistic is this at present?

Still in the Game