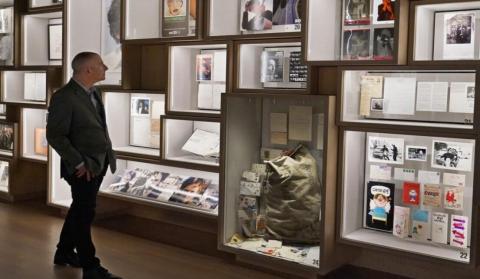 Elvis Costello, Patti Smith and Mavis Staples will be among the dignitaries expected in Tulsa, Oklahoma, this weekend for the opening of the Bob Dylan Center, the museum and archive celebrating the Nobel laureate's work.

Dylan himself won't be among them, unless he surprises everyone.

The center's subject and namesake has an open invitation to come anytime, although his absence seems perfectly in character, said Steven Jenkins, the center's director. Oddly, Dylan was just in Tulsa three weeks ago for a date on his concert tour, sandwiched in between Oklahoma City and Little Rock. He didn't ask for a look around.

"I don't want to put words in his mouth," Jenkins said. "I can only guess at his reasoning. Maybe he would find it embarrassing."

It's certainly unusual for a living figure, Dylan is due to turn 81 on May 24, to have a museum devoted to him, but such is the shadow he has cast over popular music since his emergence in the early 1960s. He's still working, performing onstage in a show devoted primarily to his most recent material.

And he's still pushing the envelope. "Murder Most Foul," Dylan's nearly 17-minute rumination on the Kennedy assassination and celebrity, is as quietly stunning as "Like a Rolling Stone" was nearly a half-century ago, even if he's no longer at the center of popular culture.

The center offers an immersive film experience, performance space, a studio where visitors can play producer and "mix" different elements of instrumentation in Dylan's songs and a curated tour where people can take a musical journey through the stages of his career. The archive has more than 100,000 items, many accessed only by scholars through appointment.

Museum creators said they wanted to build an experience...