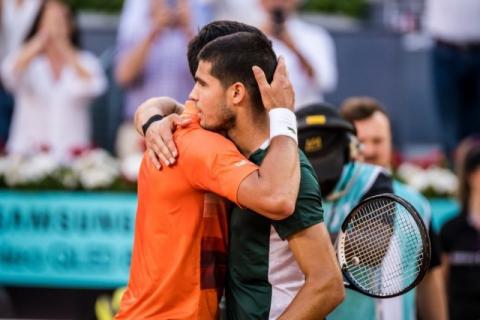 True, he was defeated by 19-year-old Carlos Alcaraz, but it was a great match in which the younger tennis player had more strength and nerves in the tied finish of the match.
Madrid, in general, was a big step forward for Novak after Belgrade, especially in terms of fitness and level of play, and after the match with Alkaraz, he was not too disappointed.
"It was a fantastic match, I'm disappointed that I didn't manage to get to the break. If I had used the advantage of some break points in the second set, everything would have been different. I think I definitely played the best since the beginning of the year", said Novak.
He admitted that the tennis player from Murcia gave him a lot of problems on the court. "I had a problem controlling his balls, obviously because of the altitude, they were faster, it was really hard. Also, I had a problem with the backhand, I couldn't position myself the way I wanted and that gave him a lot of easy points. He was mentally strong, for some of his age, to play so maturely and bravely, it's impressive, he deserved to win".
Novak's next stop is Rome and he is satisfied with how he is progressing.
"I think I'm on the right track," Novak concluded.