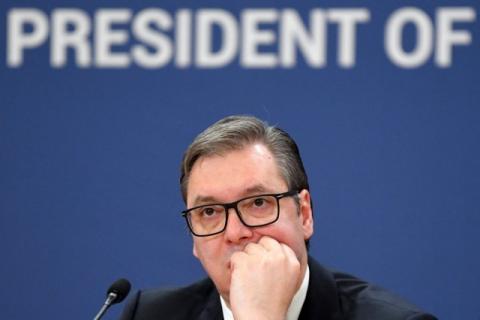 At the very beginning of his address, the President announced that he would speak on all current topics.
In the past decade, we have faced many crises, a catastrophic financial crisis, we have also faced the worst floods, the migrant crisis and a million people have passed through the country, we have faced coronavirus pandemic, and in our time we are witnessing a world conflict, you can also call it the third world war", the president said.
As he stated, in accordance with that, he divided the address into ten points.

Vui stated that the latest research showed that for the first time we have a clear majority of citizens who are against joining the EU - 44 percent, while 35 percent support EU accession.
"As the President of the Republic of Serbia, it is our job to hear and understand public opinion, but it is also our job to do what is best for Serbia. My message to everyone is that Serbia is on the road to Europe and will continue down that road more strongly", he said.
He said that we are on the European road, and that he will fight harder so that Serbia finds its place among European nations.

The second point: Kosovo and Metohija

"We had important talks with representatives of the West and tried to convey discussion with the representatives of Pristina. Since Albin Kurti has been in power, the number of attacks on Serbs increased by 50 percent. No one has reacted to that. We are facing daily violations of international public law and Resolution 1244, along with the hypocritical behavior of parts of the Western world", stated Vui.
As he pointed out, the dialogue with Pristina is almost non-existent.
"Namely, our situation has changed for the worse, after the...