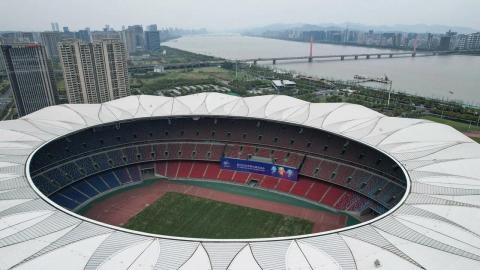 China's ambitions to be a global sporting hub took a heavy blow as the postponement of this year's Asian Games further isolated a country already cut off by its hardline zero-COVID strategy.

The ruling Communist Party burnished its global image with an array of dazzling spectacles such as Beijing's 2008 Summer and 2022 Winter Olympics, tennis and golf tournaments featuring all the world's leading stars, and a showpiece annual Formula One grand prix.

But with the exception of this year's Winter Olympics, held in a virus-secure, closed-loop Beijing bubble in February, the world's most populous nation has canceled or postponed almost all events since COVID emerged in Wuhan in late 2019.

The Olympic-sized Asian Games became the latest and biggest casualty on Friday as organizers decided to delay the multisports extravaganza "after carefully considering the pandemic situation and the size of the Games."

No new dates have yet been given for the continental showpiece, originally scheduled for Sept. 10 to 25 in the eastern city of Hangzhou with around 10,000 athletes due to compete across 40 sports.

The World University Games due to begin next month in Chengdu were also postponed for a second time citing "continued uncertainty over conditions."

They were part of a blitz of announcements on May 6 as the Asian Youth Games were also canceled, having been delayed once already, and two prestigious Diamond League athletics meetings later this year in Shanghai and Shenzhen were shelved.

China's costly and labor-intensive Winter Olympics bubble, when participants took daily COVID tests and were not allowed to mix with the public, now appears to have been the exception...