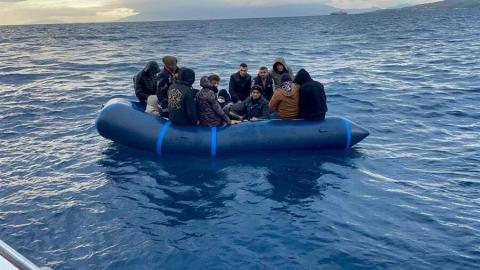 The European Union has finally started to see the Greek policy of pushbacks in the Aegean Sea, which has claimed many lives of asylum seekers, Defense Minister Hulusi Akar said on May 7.

"For years, Greece's cruelty and inhuman behavior against innocent people and all kinds of disgrace have unfortunately been ignored by the world. However, Greece was caught in these very acts with the recent FRONTEX incident, and finally, the European Union has started to see the events, albeit to a limited extent," Akar said, speaking at the Mediterranean Regional Command's new dock and pier opening ceremony.

Greece also uses some international exercises, including the Tiger Meet, for this purpose, he said. Turkey ordered its Air Force to withdraw from the exercise due to the "selfish exploitation of some issues" in the FIR, Non-Military Status Islands and personnel rescue areas, and the "effort to use the exercise against Turkey's rights and interests," he said.

Ankara wants the solution of all problems by peaceful means and methods, he said adding that, Greece continues its "expansionist and aggressive policies with its provocative actions and rhetoric," despite this being Turkey's perspective.

The head of EU border agency Frontex recently resigned after being investigated by the union's anti-fraud agency. Fabrice Leggeri was criticized by the EP for failure to protect the human rights of people seeking asylum in the EU.