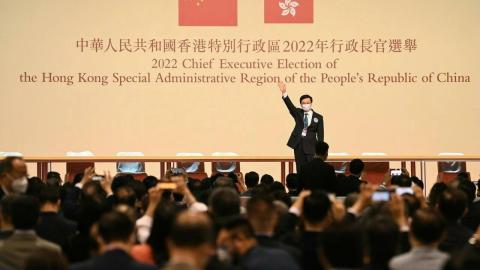 A former security chief who oversaw the crackdown on Hong Kong's democracy movement was anointed the business hub's new leader on Sunday by a small committee of Beijing loyalists.

John Lee, 64, was the only candidate in the Beijing-backed race to succeed outgoing leader Carrie Lam.

The elevation of Lee, subject of US sanctions, places a security official in the top job for the first time after a tumultuous few years for a city battered by political unrest and debilitating pandemic controls.

Despite the city's mini-constitution promising universal suffrage, Hong Kong has never been a democracy, the source of years of public frustration and protests since the 1997 handover to China.

Its leader is instead chosen by an "election committee" currently comprised of 1,461 people -- roughly 0.02 percent of the city's population.

After a brief secret ballot on Sunday, 99 percent (1,416 members) voted for Lee while eight voted against, according to officials.

Beijing hailed the near-unanimous result, saying it showed "Hong Kong society has a high level of recognition and approval" for Lee.

"This is a real demonstration of democratic spirit," the Hong Kong and Macao Affairs Office said.

Under President Xi Jinping, China is remoulding Hong Kong in its own authoritarian image after huge and sometimes violent democracy protests three years ago.

Beijing deployed a sweeping national security law to stamp out dissent and rolled out a new "patriots only" political vetting system to guarantee anyone standing for office is considered suitably loyal.

Protests have been largely outlawed, with authorities using an anti-coronavirus ban on public gatherings of more than four people as well as the security law.