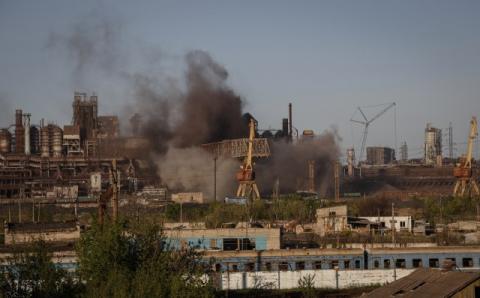 Ukraine announced that all women, children and the elderly were evacuated from Azovstal. Ukrainian President Zelensky pointed out that more than 300 civilians were rescued from Azovstal, and announced the second phase of evacuation.
A thermonuclear ballistic missile was seen in the center of Moscow during the preparations for the Victory Day celebration, which will be held in Russia tomorrow.
Russian Duma Speaker claims "US directly involved in war against Russia".
Two more Ukrainian Su-24 bombers and one Mi-24 helicopter of the Ministry of Defense were destroyed above the island of Zmeni, RT reports.

Air raid alerts go off in almost every region of Ukraine

⚡️Air raid alerts go off in almost every region of Ukraine.

It is feared that 60 people were killed in an air strike on a school in the Luhansk region, which served as a shelter for civilians.
About 90 people were in the shelter at the school, said Segej Haidai, head of the Lugansk regional military administration, adding that 30 people had been pulled out of the rubble. Seven of them were wounded, he said.
Two bodies have been found in the rubble so far, Haidai announced this morning, adding that "it is likely that all the other 60 people under the rubble are dead."

🇷🇺troops dropped an air bomb on a school in the village of Bilohorivka, Luhansk Oblast, said the Luhansk Oblast Head Serhiy Haidai. About 90 villagers were in the building who did not have time to escape. 30 people have already been rescued from the rubblehttps://t.co/xzyDPiu1zc pic.twitter.com/mvTuqrCA3W