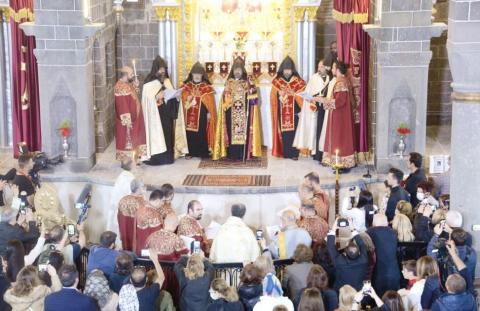 The church, heavily damaged by PKK terrorists in 2015, was reopened with a ceremony attended by Turkish Culture Minister Mehmet Nuri Ersoy.

"We have to show the best effort to make Diyarbakır one of the centers of culture, arts and faith tourism and promote this ancient city to the world," Ersoy said in the opening ceremony on May 7.

The church, located in the Sur district, was built in 1376 and is known to be the biggest Armenian church in the Middle East, with seven altars. It was used by the German army as headquarters during World War I and was converted into a warehouse after the war.

Between the 1960s and 80s, the Armenian community obtained its ownership, but due to mass immigration, the church remained deserted for several years.

Renovated in the 2000s and reopened on Oct. 23, 2011, as "Turkey's first church to be revived as a permanent place of worship," the church was heavily damaged by PKK terrorists in 2015.

"Today is a feast day for all Armenians living in Diyarbakır. The church has been renovated with funds provided by the Environment, Urbanization and Climate Change ministry," Sahak Maşalyan, 85th Turkish Armenian Orthodox Patriarch, said at the ceremony.

In a speech, Diyarbakır Governor Münir Karaloğlu highlighted, "Unfortunately, in 2015 and 2016, a brutal terror organization had demolished holy places, ancient structures and public institutions in Sur. The region is now clean thanks to massive efforts against terrorism."

After seven years of renovation, the first consecration was held with lighting candles on May 7.