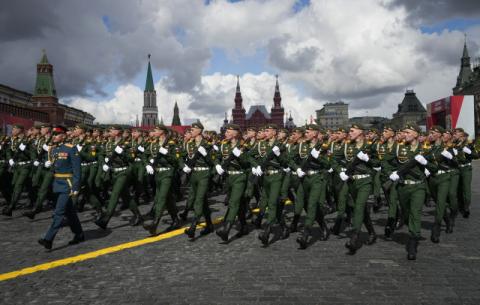 Victory parade: Putin did not declare war on Ukraine, but justified the military operation as inevitable

Russian President Vladimir Putin has not officially declared war on Ukraine, but said in a speech on Victory Day that Russia had no alternative but to continue the "special operation."

"In 2021, we offered to sign a security guarantee agreement. Russia was willing to compromise, but it was all in vain. They didn't listen to us. They had completely different plans, we saw that. Preparations were under way to attack Donbas, Kyiv started to talk about nuclear weapons, about actual absorption of our territories. This was an unacceptable threat, right next to our borders, and the United States and its partners were deploying their military infrastructure with state-of-the-art weapons, and the danger was growing. That is why Russia has made only the right decision to defend its sovereignty. After the collapse of the Soviet Union, the United States spoke of its exclusivity, humiliating not only the world but also its satellites. (...) This moral degradation has become cynical Russophobia. (...) American veterans who wanted to come were banned from attending the parade, but we are proud of them. We honor all the allied armies that defeated militarism and Nazism," he said.

He took special place to thank the "militants from Donbas, who are fighting side by side with the Russian army, for the future of their homeland" and recalled "the barbaric strikes of the neo-Nazis in Odessa in 2014."

In his speech, Putin announced that he had signed a decree to provide all possible assistance to the families...