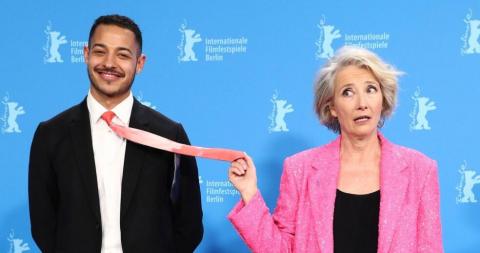 The summer movie season has not traditionally speaking, been known for its nuanced attention to female sexuality. But smack in the middle of Hollywood's high season of masculine thrill rides and sci-fi fantasies this year is "Good Luck to You, Leo Grande," a compassionate comedy in which Emma Thompson stars as a widow seeking romantic excitement with a suave sex worker, played by newcomer Daryl McCormack.

The film, to debut June 17 on Hulu, is an intimate two-hander coursing many seldom discussed issues of sexuality and shame, pleasure and repression.

"It's like a little atom bomb," says Thompson, speaking by Zoom from Scotland. "As it divides the cell, it reaches people who are very energized by it because there's so much to talk about. It pushes so many particular buttons in our minds."

"Good Luck to You, Leo Grande," directed by Sophie Hyde and penned by Katy Brand, takes place almost entirely in a London hotel room where Nancy (Thompson) and Leo (McCormack) meet on four occasions. Nancy, a religious studies teacher, has never had an orgasm. She has deep-seated insecurities about her body and, up to this point, has spent a lifetime suppressing her own desires. Leo, on the other hand, is calmly well-adjusted and believes unapologetically in giving satisfaction to others.

To Thompson, "Good Luck to You, Leo Grande" is nothing less than revolutionary in its willingness to be candid about topics usually brushed under the covers.

"Let's face it, women's pleasure has never been, as it were, top of the to-do list in present systems," says Thompson. "It's never been: Oh, we really must attend to that."

It's a startlingly open, probing performance by the 63-year-old Thompson whose screen presence has long exuded, as The New York...

Elections have started in Great Britain