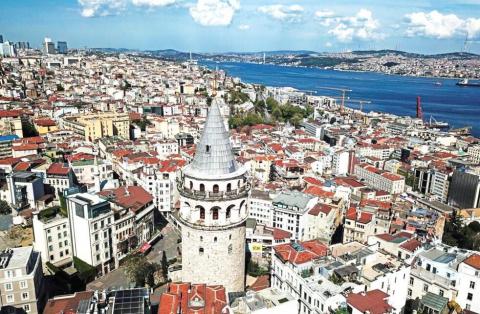 Istanbul has seen an influx of both local and international visitors in the first three months of 2022, with foreign tourist arrivals in the city rising 136 percent from a year ago.

From January to March this year, 2.9 million international holidaymakers visited the city, up from 1.2 million people in the same period of 2021, according to data from the provincial directorate of culture and tourism.

Amid the influx of tourists, the occupancy rate in the hotels in the metropolis reached 80 to 90 percent, people from the industry said.

In March alone, around 1.2 million foreign tourists came to Istanbul, well above 546,000 visitors in the same month of 2021.

Data from the local tourism authority showed that 258,000 Russians visited Istanbul in the first three months, up 37 percent on an annual basis, while the number of Iranian tourists grew by 113 percent to 253,000 people.

"People, who are of Turkish descent but hold foreign nationalities such as French, German, Belgian and Arabs living in European countries, flocked to Istanbul. That gave a boost to tourist numbers," said Ahmet Yaşar, head of an organization that represents hoteliers in the city.

"January-March is normally not a high tourist season for Istanbul. But this year, those, who are the third generation [of Turkish migrants living in Europe], bought cheap plane tickets and found...