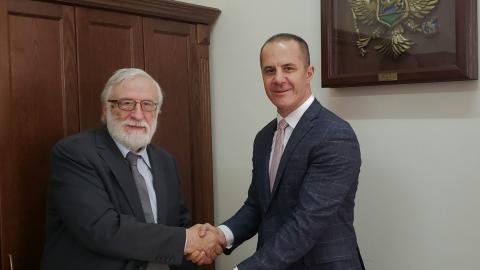 President of Montenegrin Commerical Court Blazo Jovanic (right) poses with Dean of Faculty of Law of Donja Gorica, Zoran Stojanovic, at a meeting on March 03, 2020. Photo: Commercial Court of Montenegro

Prime Minister Dritan Abazovic praised the police and prosecution action, adding that the fight against organised crime and corruption was one of his minority government's priorities.

"I hope the results in the next period will be even more visible. In the past period we had numerous cases of looting privatization supported by the former authorities," Abazovic told the media. "Now is the time to settle accounts and make everyone responsible for what was done," he added.

Media reported that heavy police forces blocked the court building while Jovanic's office was searched. While the Special State Prosecutor didn't comment on the arrest, media reported that Jovanic created a criminal organisation that in past years had cost the state budget tens of millions of euros.

Jovanic was first elected head of the Commercial Court in 2014 and was re-elected in 2019. Before his first mandate, Jovanic was a judge in Podgorica Basic Court.

The opposition and NGOs accused him of having political ties to President Milo Djukanovic and his Democratic Party of Socialists, DPS, which ruled the country for three decades.

Former Prime Minister Zdravko Krivokapic also praised the police action, adding that the Commercial Court and its President had been working against the state for private interests.

On April 18, the ex-president of Montenegro's Supreme Court, Vesna Medenica, was...