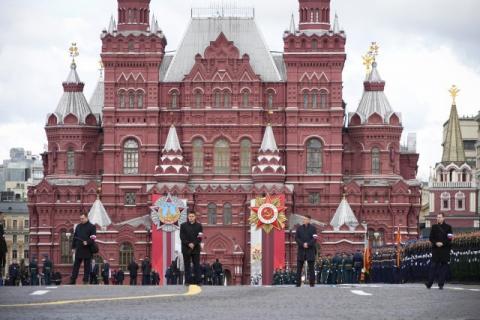 The evacuation of civilians from Mariupol continues.
The leaders of the group of seven most developed countries in the world promised at an online meeting with Ukrainian President Volodymyr Zelensky that they would further isolate Russia economically.
Russia's Ministry of Defense claims that it shot down a Ukrainian Su-25 plane and a drone, while Ukrainian forces claim that Russian forces fired projectiles at Odessa from the Black Sea on several occasions.

Putin has arrived Follow the Victory Parade in Moscow LIVE Trudeau: More weapons and military equipment will be sent to Ukraine

Canadian Prime Minister Justin Trudeau announced, after an unannounced visit to Kyiv on Sunday, that new weapons and military equipment would be sent to Ukraine.
After talks with Ukrainian President Volodymyr Zelensky, Trudeau told reporters that Canada would also impose new sanctions on Russian individuals and companies due to the Russian attack on Ukraine, Reuters reported.
He added that Canada will reopen the embassy in Kyiv.

People in Vladivostok take to the streets to watch the annual parade marking Russia's 1945 victory over Nazi Germany.

Victory Day parades begin in Russia.
People in Vladivostok take to the streets to watch the annual parade marking Russia's 1945 victory over Nazi Germany.
This year's parades aim to justify Russia's war in Ukraine, which has gone on longer and cost more than Moscow expected pic.twitter.com/l2aeMeRfAj

EU: We are one step closer to imposing new sanctions on Russia

EU governments have come one step closer to agreeing to impose tougher sanctions on...