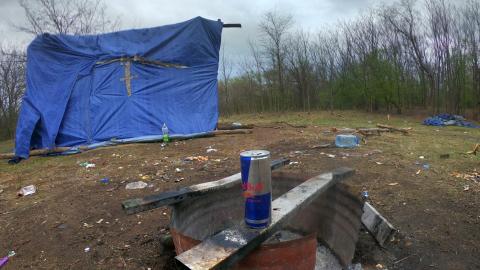 While Western public attention focuses on refugees from Ukraine, non-European ones are still on the move, squeezed between violent police tactics and often ruthless smugglers, who hold the key to their successful passage to a new life in the West.

According to data up to April 18, obtained by BIRN, some 3,679 migrants and refugees are currently staying in Serbian state-run camps, but many more are in squats, hostels, private homes or camping in forests, like Radanovac.

The people smuggling operation does not stop. BIRN sources in the Serbian security services report smugglers' gang wars in the last months, noting at least two murders or disappearances of persons involved in this lucrative illegal business.

Vuk Vuckovic, from Klikaktiv, an organisation which helps refugees outside state camps, told BIRN that around 4,000 people are camping in squats or private accommodations in northern Serbia.

"Police brutality, according to statements of refugees, has become even more brutal, and border crossings are almost disabled due to the growing number of police patrols. As attempts to cross the border by refugees do not succeed, this pushes them even deeper into the hands of the smugglers," Vuckovic says.

He condemns what he called "EU hypocrisy", in creating a a sort of hierarchy of refugees in the Ukraine war, calling it "selective...