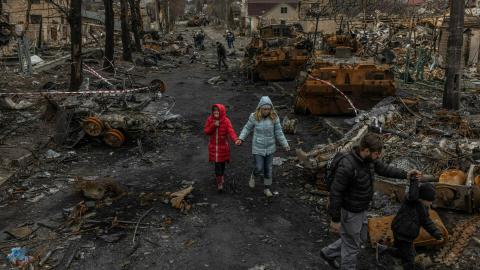 This was Economist correspondent Tim Judah's gruelling eye-witness description of the streets of Bucha, Ukraine, after Russian forces left.

Judah, who covered the 1992-5 Bosnian war for the UK Times, spent the first weeks of the invasion in Ukraine, where he witnessed the consequences of crimes committed against civilians when, alongside other reporters, he entered Bucha, Hostomel and other cities, after Russian soldiers had pulled out.

The footage of killed civilians in Bucha caused shock and anger all over Europe. But, despite extensive footage and testimonials from journalists like Judah who visited those places, Russia flatly insists the Bucha massacre was staged by the Ukrainians.

"The world saw another crime by the Ukrainian authorities in Bucha where they faked the alleged murder of civilians by the Russian military," Maria Zaharova, spokeswoman of the Russian Foreign Ministry, said.

On April 20 the Russian embassy in Sarajevo conveyed its stand to Bosnian citizens, calling the crimes in Bucha in a post published on Telegram, "a well-planned provocation prepared with the help of American and European intelligence agencies".

"The main task is to divert the attention of the world community from the [Ukrainian] nationalist battalions' massacre of the Russian-speaking population.

"Of all suburbs of Kyiv, Bucha was not selected by accident, because for the English-speaking public, the term 'massacre in Bucha' ('Butchery in Bucha') makes the necessary wordplay," the embassy announced.