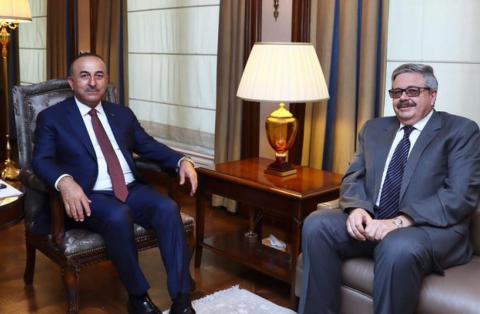 Russian Ambassador to Turkey Aleksei Erkhov has highlighted the importance of Turkey's mediation role between Ukraine and Russia, expressing hope that peace talks between the two warring parties will soon yield results.

"The two meetings [between Ukraine and Russia] display the role of Turkey. I sincerely want to say that we wholeheartedly attach importance and value to Turkey's contribution to this process and its mediation role," Erkhov said at an event for Russia's Victory Day over the weekend.

Turkey hosted two direct meetings between Ukraine and Russia, one in Antalya at the level of foreign ministers and the other in Istanbul between the two sides' delegations in a bid to end the ongoing war.

Citing the meeting in Antalya where Russian Foreign Minister Sergey Lavrov attended a three-way meeting with Ukraine's Foreign Minister Dmytro Kuleba with the participation of Foreign Minister Mevlüt Çavuşoğlu, the ambassador said Lavrov's attendance at this meeting and the one in Istanbul show the value Russia gives the Turkish mediation.

On ties with Turkey, Erkhov said a happy future is being built between the two countries.

The Russian Embassy celebrated Victory Day through a parade within the embassy compound and an event at the Russian House in Ankara. The ambassador launched a photo exhibition as well.

Greek sovereignty, Turkey and the West

Local media: Plane with 72 people on board crashes in Nepal