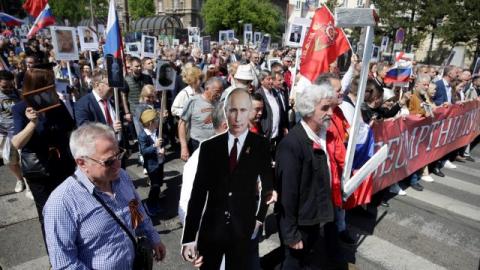 Serbia and Bosnia's Serb-dominated entity, Repubika Srpska, on Monday celerbrated Victory Day, the day when Russia marks its victory over Nazi Germany in 1945 with huge parades in Moscow.

At a time when support for Russia is controversial in Europe, EU candidate Serbia sent messages of support to the EU as well as Russia.

Nebojsa Stefanovic, Serbia's Defence Minister, said in a press statement that Victory Day and Day of Europe - as May is known in much of Europe - "symbolize our glorious, heroic history and the future we want to build for our children … During the [Second World] war, we were one of the peoples in the world that suffered most, but we did not give up for a moment in the fight for humanity, in the fight for freedom and peace," he said.

Stefanovic added that while keeping alive the memory of the ancestors, today "we are building a country dedicated to preserving peace and stability", stressing that Serbia "sees its place in the EU".

The day was marked in several Serbian cities. In Belgrade, wreaths were laid at the Memorial Complex of the Cemetery of the Liberators with high military and state honours.

After a two-year gap, an "Immortal Regiment" parade was also held in Belgrade, an event traditionally organised...