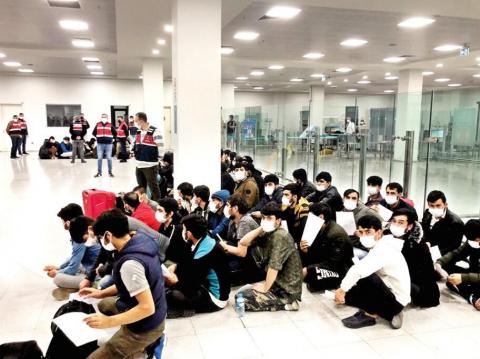 The total number of asylum seekers in Turkey is 4,082,693, and of them, 3,762,686 comprise Syrians under temporary protection, Deputy Interior Minister İsmail Çataklı has said.

"About 122,000 of this number have been passive registrations for two years. In other words, there is no sign that they are in Turkey," daily Hürriyet quoted Çataklı as saying on May 8.

According to official figures, there are currently 5,500,690 foreigners in Turkey, he said and emphasized that not all of them are refugees. This figure includes students, British, German and Russian residents in Antalya, and foreigners such as trained police officers, Çataklı added.

Afghans rank first in the irregular migration wave to Turkey. Currently, there are 12,000 foreign nationals from 80 different countries in 30 repatriation centers across the country. Of these, 7,000 are from Afghanistan, 1,500 are from Syria and 1,000 are from Pakistan. In 2022, a total of 21,087 people from 113 different nationalities were deported. Among those deported, Afghanistan ranks first with 9,654 and Pakistan ranks second with 4,206, the daily reported.

According to the information given by Çataklı, 497,926 Syrians voluntarily returned to the areas where safety was ensured.

He noted that a total of 8 million immigrants, including 6 million in Idlib, Olive Branch, Euphrates Shield and Peace Spring regions, and 2 million on the Iranian side of the border, are kept stable.

"Turkey is the only country in the world, including the European Union, with a fully-fledged holistic migration policy," he...

Annalena Baerbock for Greece: I am visiting one of our closest partners in Europe