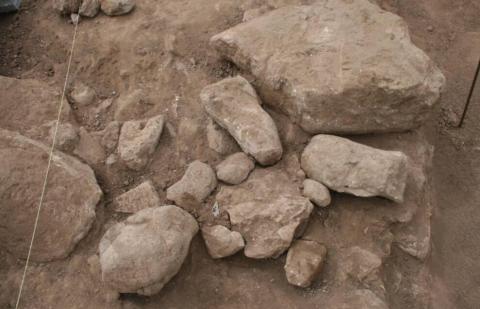 Archaeologists in Sardinia have unearthed the torsos of two more limestone statues of boxers within the Iron Age necropolis of Mont'e Prama, Italy's culture ministry said on May 7.

Culture Minister Dario Franceschini called the find at the archeological site in Cabras, western central Sardinia, an "exceptional discovery" that should shed more light on the ancient Mediterranean culture whose tombs and statuary have been slowly uncovered since the 1970s.

The naked torsos and other fragments have been identified as boxers, due to a shield that wraps around their bodies, and are similar to another two sculptures unearthed a few meters away in 2014 and now on display at the local museum, the ministry said.

Archaeologists working on the southern part of the sprawling necropolis, first discovered in 1974 by local farmers, also found the continuation of the site's funerary road on a north-south axis, along which have been found tombs dating back to between about 950 BC to 730 B.C.

While small and medium-sized fragments are being documented and recovered from the earth, "the two large and heavy blocks of torsos will need time to be freed from the sediment surrounding them and to be prepared for safe recovery," said the culture ministry's superintendent for southern Sardinia, Monica Stochino.

The site is believed to be part of the Nuragic civilization that controlled the island of Sardinia for centuries beginning in the Bronze Age. The people erected mysterious stone towers called "nuraghe" that today dot the Sardinian countryside and whose original purpose remains unknown.

Thousands of fragments and major pieces from Mont'e Prama discovered over the decades have so far been reassembled into about two dozen statues, each over 2...