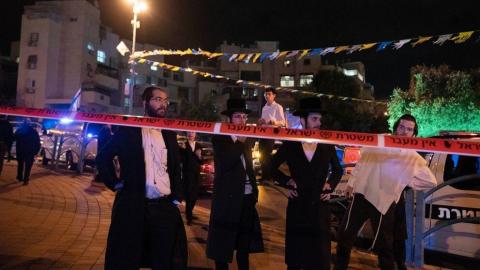 It was the latest episode of violence during weeks of Palestinian attacks in Israel, and Israeli military raids in the occupied West Bank that have left at least 18 Israelis and more than 30 Palestinians dead.

The Palestinian man died after he was shot by Israeli troops trying to cross Israel's separation barrier near a military checkpoint in the occupied West Bank. The Israeli military said soldiers "spotted a suspect" attempting to sneak across the barrier near the West Bank city of Tulkarem and fired at him. It said the man was evacuated to receive medical treatment, but declined commenting on the man's condition. The Palestinian Health Ministry confirmed his death.

The Israeli military also said an Israeli civilian shot a Palestinian armed with a knife who entered a West Bank settlement south of Jerusalem. The Palestinian Health Ministry said 17-year-old Mutassim Atallah was killed in the Tekoa settlement.

Searches were under way for a second Palestinian, the army said.

In a separate incident, police said a Palestinian stabbed and wounded a police officer outside Jerusalem's Old City, and that officers shot the assailant. Paramedics said the officer was hospitalized in moderate condition. The attacker's condition was not immediately clear.

Sunday's incidents were the latest in string of violent episodes in recent weeks, including deadly attacks inside Israel, an Israeli military crackdown in the West Bank, and clashes between Israeli police and Palestinians at a major holy site in Jerusalem sacred to Jews and Muslims.<...