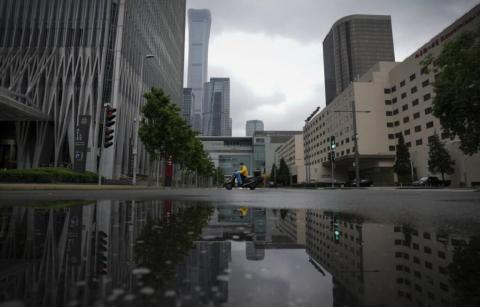 Two and a half years since the coronavirus first emerged in Wuhan, China is the last major economy still closed off to the world, despite its relatively low death toll.

Lockdowns across dozens of cities have wreaked havoc on supply chains over recent months, crushing small businesses and trapping consumers at home.

That has imperilled Beijing's full-year growth target of about 5.5 percent.

"We remain deeply concerned about growth," Nomura analysts said this week. "We believe the Omicron variant and zero-COVID strategy represent the dominant challenges to growth stability."

To curtail the growing economic damage, Beijing has offered words of respite to the tech sector from rolling regulatory crackdowns and promised to pump prime the economy with an "all-out" infrastructure campaign.

But observers say rallies may be temporary as long as the state's reflex remains to hammer down the virus caseload at all costs.

Analysts are waiting for details of the delivery behind sweeping promises of support from Beijing's policymakers.

China's tech firms have been under the state's microscope on concerns over data misuse and monopoly.

But shares of major tech firms soared as the government called for "healthy development" of the sector and shifted its language on completing its "rectification".

It is unclear if that signals an end to a punishing round of regulatory scrutiny.

Markets also cheered on as the government announced support for real estate and an...