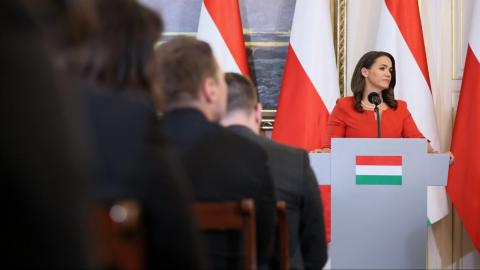 Hungarian President Katalin Novak ruffled diplomatic feathers in Romania on Sunday when she posted a picture of herself climbing a mountain peak in Alba County in the centre of Romania standing by a stone painted in Hungarian colours.

Novak told the Romanian Foreign Minister, Bogdan Aurescu, who had criticised a previous statement by her, that her duty was to represent "all Hungarians, regardless of whether they live inside or outside the borders".

The Romanian ministry told BIRN that it had no new comments to make regarding this issue.

"We will never cut the umbilical cord between the motherland and the Hungarians who came to live outside the borders of Hungary, nor will we ever allow it to be cut," Novak told Hungarian media outlet Hirado.

The milestone on Piatra Secuiului has been the subject of disputes between Romanians and Hungarians for years. The stone has periodically been painted either in the colours of the Romanian flag or those of the Hungarian one.

Novak is close to Hungarian Prime Minister, Viktor Orban, and served as Minister for Family Affairs in the previous government.

Romania has said that, under international law, "a state cannot claim its rights of any kind concerning the citizens of another state".

Romania has also said that such statements like Novak's do not correspond to European standards, or to the spirit of the treaty of understanding, cooperation and good neighbourliness between Romania and Hungary.

Novak was on a private visit to Romania to Cluj-Napoca and Alba-Iulia in Transylvania...