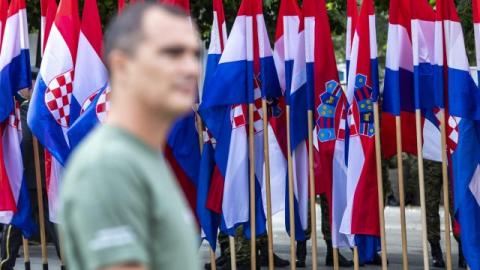 Serbia's Academy of Sciences and Arts, SANU, has dismissed as an "inflammatory political pamphlet" a paper drafted by its Croatian counterpart setting out the demands it says Zagreb should make as part of the negotiation process on the European Union accession of Serbia, Montenegro and Bosnia and Herzegovina.

In a paper published last week, the Croatian Academy of Sciences and Arts, HAZU, laid out a raft of conditions that it said Zagreb should set in order to protect Croatian national interests in the region as its fellow ex-Yugoslav neighbours move towards membership of the EU, which Croatia joined in 2013.

For Serbia, they include a demand for Belgrade to "renounce Greater Serbia propaganda," including what HAZU termed the "Jasenovac myth."

Jasenovac was a concentration camp for Jews, Serbs and Roma operated by the fascist Ustashe regime of the Independent State of Croatia, NDH, a Nazi-backed puppet state during World War Two. Tens of thousands are believed to have perished at the site, but the actual figure has for decades been hotly disputed by Croatia and Serbia, while some Croatian nationalists deny it was ever a concentration camp.

HAZU's demands, which Croatian media reported were sent to the president and prime minister in February, also include Belgrade's recognition of its "aggression" against Croatia during the 1991-95 war and the payment of damages, as well as the classification of the Bunjevci national minority in Serbia as Croat and its language as Croatian.

It calls for the demarcation of the border between Serbia and Croatia at the Danube river to be finalised and for the disputed river island of Sharengrad to be recognised as Croatian, as well as better protection of the rights of the Croat minority in Serbia...