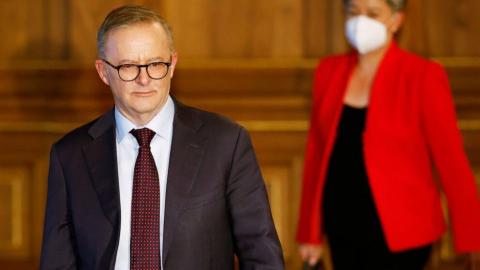 Australia's new government has urged China to lift trade sanctions if it wants to reset a bilateral relationship that plumbed new depths under the previous administration.

The Chinese premier's congratulatory letter to Prime Minister Anthony Albanese on his election victory was widely seen as a relaxation of Beijing's two-year ban on high-level government contact with Australia. Premier Li Keqiang said China was ready to work with Australia to development the bilateral relationship.

But Albanese said it was China, not Australia, that had changed since his center-left Labor Party was last in power in 2013.

China has created a series of official and unofficial trade barriers in recent years to a range of Australian exports worth billions of dollars including coal, wine, barley, beef and seafood.

"It is China that has placed sanctions on Australia," Albanese told reporters Tuesday at a Tokyo summit that he attended with President Joe Biden, Japanese Prime Minister Fumio Kishida and Indian Prime Minister Narendra Modi.

"There is no justification for doing that and that's why they should be removed," Albanese added.

"We would certainly like to see those sanctions and those tariffs lifted. They are damaging our economy. They are making life harder for some of our employers and workers here in Australia and so obviously we would like to see those measures lifted," Chalmers said on Wednesday.

Peru races to save endangered birds threatened by oil spill