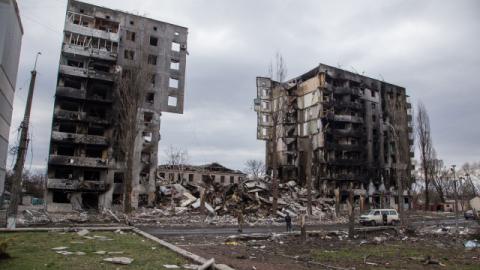 Russian offensive in Donbas in advancing

Early this morning in Zaporizhzhia there was a Russian rocket attack, the city administration announced in its channel on the social network Telegram. There are still no reports of casualties or damage.

The Russian offensive in Donbas is advancing. At least 14 civilians have been killed in bombings in the Donetsk and Luhansk regions over the past 24 hours.

Russian sappers have completed the demining of the port in the occupied city of Mariupol, which is the largest Ukrainian port on the Sea of ​​Azov. Its demining enables Russia to transport goods and, possibly, troops more easily in the occupied territories between Crimea and Donetsk. The Ministry of Defense in Moscow announced that it will provide a corridor for safe passage from the Azov to the Black Sea from 8 o'clock local time.

Russia is ready to provide a humanitarian corridor for food carriers to leave Ukraine. This was announced by Russian Deputy Foreign Minister Andrei Rudenko, quoted by Interfax.

About 70 ships from 16 countries are blocked in Ukrainian Black Sea ports.

The other major Russian-occupied port, Kherson, remained unusable as the Ukrainian military mined the exit from the Dnieper estuary.

Pro-Russian separatists have taken over the city of Svitlodarsk and two other Ukrainian settlements in the Donetsk region, the district's governor Pavlo Kirilenko confirmed. Svitlodarsk is about 60 kilometers southwest of the city of...