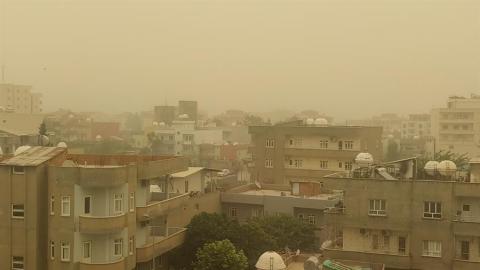 Dust clouds have covered the skies of southeastern provinces, while the visibility range has decreased due to the dust transportation from Syria.

Layers of dust coated vehicles and apartment balconies in the provinces of Şırnak, Bingöl, Mardin and Tunceli late on May 23.

Local officials warned the residents suffering from dyspnoea or asthma not to go out. The mentioned provinces also woke to dusty skies on May 24, causing trouble for especially drivers driving in the morning.

Northern Syria and Iraq have been suffering heavy dust storms for over a fortnight.

"About 200 people have been hospitalized for suffocation symptoms," the monitor added.

Experts blame the drought and climate change for the heavy dust storms. "Reduced soil moisture and dry surface conditions make it easier for dust and sand particles to be picked up in larger quantities by regional winds, thus providing the perfect breeding ground for dust storms," said Mohammed Mahmoud, an expert at the Middle East Institute.