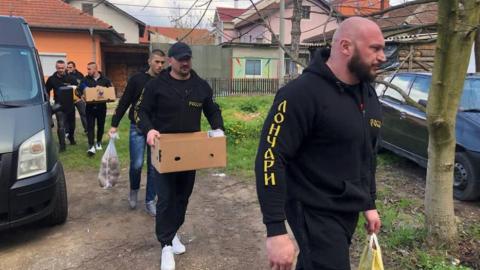 In January 2022, after Srdjan Letic was sentenced to six months in prison for causing severe bodily injuries to Cvijetin Sofrenovic, the Basic Court in Brcko allowed him to commute his sentence for a fine of 9,000 euros, the Court has confirmed to BIRN.

Letic, who has several previous convictions, has since attended at least two mass rallies in Belgrade in support of the Russian invasion of Ukraine after having commuted his sentence.

His indictment, confirmed by the Basic Court in November last year, said that during the night of January 13, 2021, he called Sofrenovic in Brcko and asked him why he was accusing him of drug dealing, which he denied.

Letic, accompanied by two other defendants, then asked him to come out of his apartment and, the indictment said, hit him several times in his head and body.

According to the charges, Sofrenovic was severely injured in his head and nose, suffered injuries to blood vessels and bruises and had a severe eye injury.

The Brcko Court sentenced Letic, following a guilt admission agreement with the Prosecution, to six months in jail and Sinisa Stevanovic to one month and 15 days in prison for inflicting severe bodily injuries on Sofrenovic. Mirko Bjelovic denied guilt and his trial resumed in January.

Letic's lawyer asked the Court to allow Letic to commute the prison sentence for up to one year for a fine.

The court confirmed to BIRN that on March 28 it approved the commutation of the six-month prison sentence for a fine of KM 18,000, equal to 9,000 euros.

Asked to comment on the commutation of the prison sentence for a fine, the prosecution said it was a legal option and "exclusively a court decision which the Prosecution could not influence, even in the appeals...

This is where World War III could break out
PM Kyriakos Mitsotakis: Watch the live press conference after the EU Summit