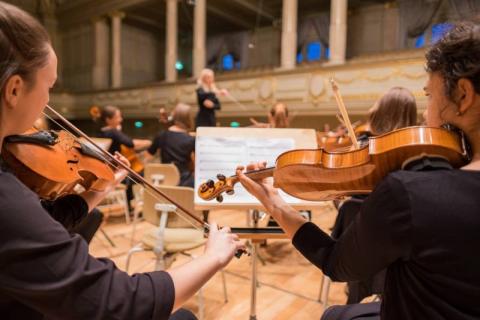 Ljubljana – Composer Damijan Močnik is the winner of the 2022 Kozina Award, the top honour for this art form, which is given out by the Slovenian Composers’ Association. Močnik is being honoured for his well rounded sacral oeuvre, says Wednesday’s press release by the association, which will present the award to the composer on 2 June.

Močnik, who was also one of six artists to win the prestigious Prešeren Fund Prize this year, was born in 1967 in Kranj. He graduated in composition from the Academy of Music in Ljubljana and then studied abroad, mainly in choir conducting, including with the acclaimed choirmaster Eric Ericson.

He works as a professor of music, choirmaster and director of musical activities at the Diocesan Classical Gymnasium at the St Stanislaus Institute in Ljubljana, where he and his colleagues have built the so-called choral pyramid, a hierarchical system of seven choirs.

One of them is the Megaron Chamber Choir, which was founded in 2003 and has developed into one of the most acclaimed Slovenian choirs.

Močnik also participates in the professional and artistic councils of choral events, lectures at courses and professional meetings, and is a member of juries at choral competitions at home and abroad.

As a composer, he explores choral, a cappella and vocal-instrumental music. He is currently one of the most frequently performed contemporary Slovenian composers abroad, according to the Megaron Chamber Choir website.

The Kozina Award, named after composer Marjan Kozina (1907-1966), is being conferred by the Composers’ Association since 1994.