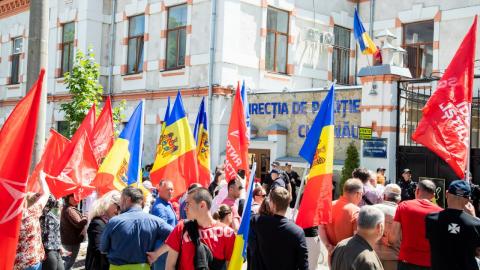 Former Moldovan president Igor Dodon on Wednesday said his detention on Tuesday on treason charges was "a political case", claiming that the governing pro-European Action and Solidarity Party, PAS, was pusuing a vendetta.

He added that "a fair and politically uncontrolled trial will prove him right" after he was detained on Tuesday for 72 hours for illicit enrichment, passive corruption and illegal party financing and treason.

Prosecutors conducted an 11 hours search at Dodon's house and other locations belonging to his relatives and friends. They collected significant sums in cash, in euros or Moldovan lei.

According to Prosecution, during police searches, Dodon's brother-in-law was caught at the former president's home trying to eat a receipt that showed Dodon was the beneficiary of a resort in his native village of Sadova, 50 kilometres from Chisinau.

"I want to assure you that for every element of interest to prosecutors, I have the necessary explanations and justifications, removing any suspicion of corruption and illegality," Dodon said.

Members of his Pro-Russian Moldovan Socialist Party, PSRM, organized protests on Wednesday in front of the government building and said similar events would be held in the following days.

They chanted slogans against the pro-Western President Maia Sandu and against Prime Minister Natalia Gavrilita: "Freedom for Dodon!", "Down with the Government!", "Down with Maia Sandu! Stop the dictatorship!"

Tensions have heightened in Moldova since Russia invaded its neighbour Ukraine in February, raising fears for Moldova's own security.