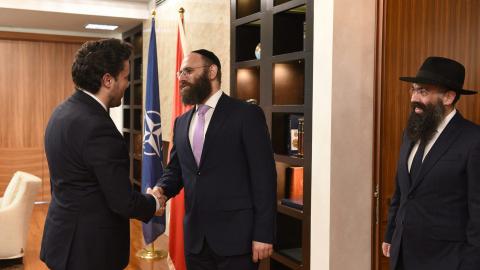 The existing Jewish Community in Montenegvo on May 24 accused the government of violating the Act signed in January 2012, which recognized Judaism as the fourth official religion of Montenegro.

"By law, a religious community can be registered if there are at least three adult believers who are Montenegrin citizens and reside in Montenegro," it said.

"The Act of Mutual Relations between the Government and the Jewish community in Montenegro is not of international law as it is not concluded between two international legal entities," the ministry added. "So, it has lower legal force than the Freedom of Religion Law."

During a meeting with European Jewish Community leaders, Prime Minister Dritan Abazovic on May 17 welcomed the registration of another Jewish religious organization in the country, stressing that the government would cooperate with "all well-meaning people, without discriminating against the basis of ethnicity, political or religious beliefs".

"A new religious community of Jews in Montenegro has been registered without the consent of the Jewish Community of Montenegro. The organization was registered by former chief Rabi of Montenegro, Ari Edelkopf, despite the fact he was officially sacked in 2020," Offner Bokan said.

Los Angeles-born Edelkopf was appointed Chief Rabbi in Montenegro in November 2019, after...