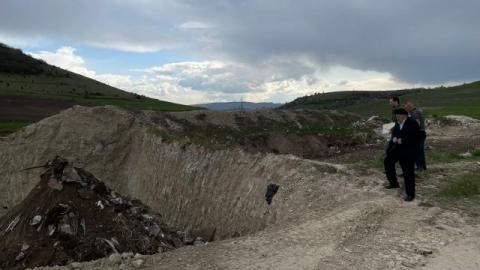 Serbia's Office for Missing Persons on Wednesday said no human remains were found at the Stavalj mine near Sjenica in southwest Serbia, where it was suspected that Kosovo Albanian victims of the Kosovo war were buried.

Veljko Odalovic, president of the Commission for Missing Persons, said 13 days had been spent searching at this location on the request of the Kosovo delegation and that geologists have determined that the soil has not been changed in last 20 years.

"Over 13 working days, more than 7,000 cubic meters of material have been searched here and today we can announce that no remains have been found," Odalovic told the media.

"We will start returning the site to its original position. Related to this and other searched sites, regardless of source and reliability information, I must say that all the locations we received were checked. We have no right to ignore any information we receive and not check it," Odalovic said.

Martina Fava, Head of the Working Group on Missing Persons of the International Committee of the Red Cross said co-operation was the "key to finding missing persons".

Several mass graves have been exhumed in southern Serbia since the Kosovo war ended. The bodies of Kosovo Albanians killed by Serbian forces in massacres were brought there to be buried as part of attempts by Slobodan Milosevic's regime to cover up its crimes.

After the most recent mass grave discovery, at an open-cast mine in Kizevak, in southern Serbia, the remains of seven...