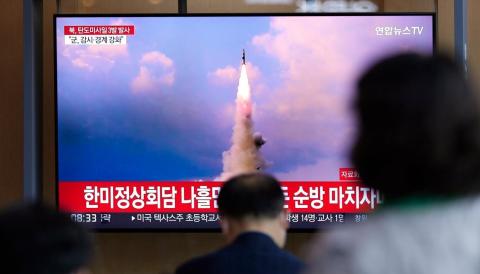 Three missiles -- including one suspected ICBM -- were fired from the Sunan area in Pyongyang, Seoul said, where an airfield has become a key site used in multiple recent weapons tests by the nuclear-armed regime.

The launch, one of nearly 20 weapons tests by Pyongyang so far this year, prompted joint US-South Korea live fire missile drills in response, as both sides slammed what they called continued "provocations" by the nuclear-armed state.

The United States condemned the "destabilizing" launches, and called for Pyongyang to "engage in sustained and substantive dialogue," a state department spokesman said.

South Korea's Joint Chiefs of Staff said in a statement that it had "detected at around 0600 (2100 GMT), 0637 and 0642 the firings of ballistic missiles launched from Sunan area towards the East Sea", it said, referring to the Sea of Japan.

"The first ballistic missile (suspected ICBM) had a range of around 360 kilometres (225 miles) and an altitude of around 540km," Seoul's Joint Chiefs of Staff said in a statement.

The Wednesday launches are the latest in a blitz of sanctions-busting weapons tests by Pyongyang this...