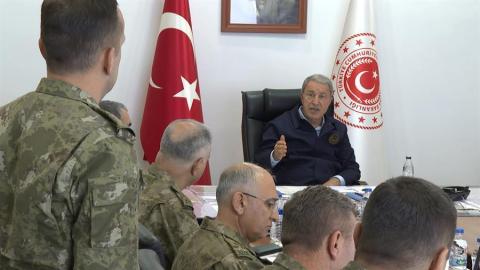 Turkey has neutralized more than 100 PKK terrorists in Operation Claw-Lock, Turkish Defense Minister Hulusi Akar has said, following the killings of five Turkish soldiers in clashes with the terrorist organization in northern Iraq.

"After the treacherous attack, our commandos cornered a group of terrorists and held an operation to a cave [they were hiding]," Akar said in a press conference in a military border post in the southeastern province of Hakkari.

"The Claw operation series continue and Claw Lock is the last link in the chain," the minister said. "The number of neutralized terrorists topped 100. We will successfully finish this operation and maintain control of our borders. We are so close."

Akar highlighted that "the PKK shows signs of downfall."

"We will save our society from this 40-year-old terror trouble," the minister highlighted.

Five Turkish soldiers who were killed on May 24 in clashes in northern Iraq were laid to rest on May 25, with funeral services held in their hometowns.

Separately, the Interior Ministry issued a statement on May 24, highlighting that two PKK terrorists were killed in the Amanos Mountains in Turkey's south.